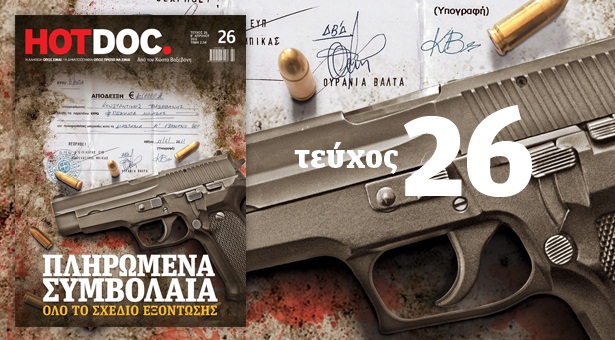 Greek journalist Kostas Vaxevanis has published a detailed account of an alleged criminal ring’s plans murder him. In addition, the ring was allegedly responsible for defamatory anonymous blog posts and blackmailing of journalists as well as a candidate for political office in the last elections, among a slew of illegal activities. His report is published in full in the April 18 issue of Vaxevanis’ magazine HOT DOC.

According to Vaxevanis, the criminal ring is composed of current and former members of the Greek National Intelligence Service (NIS), journalists, and some of their spouses. In the article, the members are almost all identified only by their initials and some redacted photos of members are also included. Funding for the team is provided by a banker who is also not named, and they were employing the services of a spy from neighboring fYROM. Vaxevanis alleges that the group is behind both a failed attempt on his life in September 2012 as well as a defamatory blog post on the site Fimotro in an apparent effort to discredit him. A similar defamatory post on the same site succeeded in causing the electoral defeat of Vasilis Hitos, a candidate in last year’s elections with the Independent Greeks political party. Journalist Tasos Telloglou was also threatened by the banker. Also uncovered was an apparent plot to falsely incriminate a former female bank manager by planting drugs in a restaurant she owned. The bank manager had been fired ostensibly for embezzlement but allegedly it is actually because she possesses damning evidence about the banker’s family’s activities. By orchestrating a very public arrest of her on charges of distributing drugs, her credibility as a witness was to be damaged in case her allegations against the bank came to light. *

Vaxevanis has provided his evidence to the prosecutor’s office where an investigation is being conducted. In addition, copies of recordings of the what is alleged to be incriminating conversations of the criminal ring have been sent to reporters abroad. As of yet, no arrests have been made and he has not been offered police protection.

The only member of the ring named in the story is fellow journalist Yiannis Papagiannis. He was the one who allegedly posted a falsified receipt for EUR 50,000 from the NIS on Fimotro in an effort to discredit Vaxevanis as being on the payroll of the NIS in apparent retaliation for his reporting against certain Greek banks in May 2012. The receipt was on official NIS stationary with an agency stamp, however Vaxevanis’ signature was forged. The ring had allegedly created similar receipts for several other as yet unnamed journalists to be used either as leverage for extortion or as punishment.

Vaxevanis had sued Papagiannis last year following this publication, however Google -which hosts the site on their Blogger service- would not release the site owner’s personal information to the court since it was not a felony charge. The court would not accept as sufficient evidence a previous investigation for blackmail where Papagiannis had already been identified as the owner. However, Papagiannis himself admitted recently that he is the site admin after Government Press Secretary Simos Kedikoglou alleged that Papagiannis asked him for monthly payments in return for positive coverage.

Vaxevanis had become suspicious when he noticed that articles about Reuters journalist Stephen Grey on Fimotro and they featured pictures of Grey taken at a distance with a telephoto lens that looked very much like he was being followed. At the time, Grey was working on a story about certain Greek banks. Sure enough, on June 20 Grey and his team apprehended someone who had been following them. But the most convincing evidence came last September. A few days after publishing an account of what appeared to be a failed attempt to murder him in his house, Vaxevanis was approached by a woman claiming to be a member of the ring. In addition to revealing relevant information that only people involved would have been privy to, she was able to demonstrate to a handwriting expert that she was the one who falsified the signatures of Vaxevanis and others on the fake NIS receipts. She claimed she was brought in under false pretenses and worried the ring might kill her after they had completed their assignment.

The full story is available in Greek with purchase of the latest issue.

* Note: the original version of this post included the following now-removed sentence re: female bank manager: “Also uncovered was an apparent plot to falsely incriminate a female bank employee in retaliation for a dispute she had with the bank by planting drugs at the branch she worked at and make it appear that they were hers.”